School and/or Teacher:
None

A floral design on linen announcing their marriage.  Backed and then surroumded by a rayon cord which provides a hanger and finishes the bottom

Excellent condition, no tears or stains on the stitched fabric.  The stitched picture depicting names, dates and occasion is framed within a rayon braided cord.  The green cord shows a small amount of wear.  At the moment it isk wrapped in tissue paper and tucked away in a drawer

Name or initials on sampler: Stephen and Michelle Seaboyer

Stephen and Michelle united in holy matrimony, May 1, 1992

Michelle and Stephen met in the autumn of 1989 when Stephen came to Wallaceburg where Michelle was born and raised.  He came to be the music pastor at the church where Michelle and her family attended. She was part of the band and choir program and played the flute and piccolo (there were three other flautists who also played the piccolo, though none of the four enjoyed the instrument). during one of the first rehearsals, Pastor Stephen (as he is known) asked Michelle to get the piccolo for a song they were rehearsing. She said she would rather not, because she knew that it was not her turn for that chore. Stephen was unaware of her reason and replied “I am not asking you, I am telling you”. In spite of her natural anger at this unfairness, Michelle continued to play in the band and offered to help out in any way. Their friendship blossomed over the next year, as they worked together on the music program. Michelle invited Stephen to join her family at some of their events and Stephen took Michelle on a few outings with others. They began dating in 1990. In October 1991, Stephen moved to Cambridge to work in a church there. Michelle expected that this would be the end of their relationship, as marriage had never been discussed. She was unaware that Stephen had already designed a custom ring and was having it made at a local jeweller. Thanksgiving weekend 1991 Stephen took Michelle to Niagara Falls, supposedly to buy fudge. While there he asked her to marry him. She said “Are you serious?”, squealed and gave him a big hug and a kiss. A few minutes later, after putting the ring on her finger, he asked “So is that a yes?”. They were married in May of 1992. Stephen’s maternal Aunt Dale made a lovely decoration for their new home – this sampler.

This sampler was a joy to design and stitch, and I am glad that it has been appreciated by them. I enjoyed doing the bullion roses, and the simplicity of the design. I feel that the cord enhances the work.

I am happy that their marriage has flourished for all this time and wish them many more years of joy. 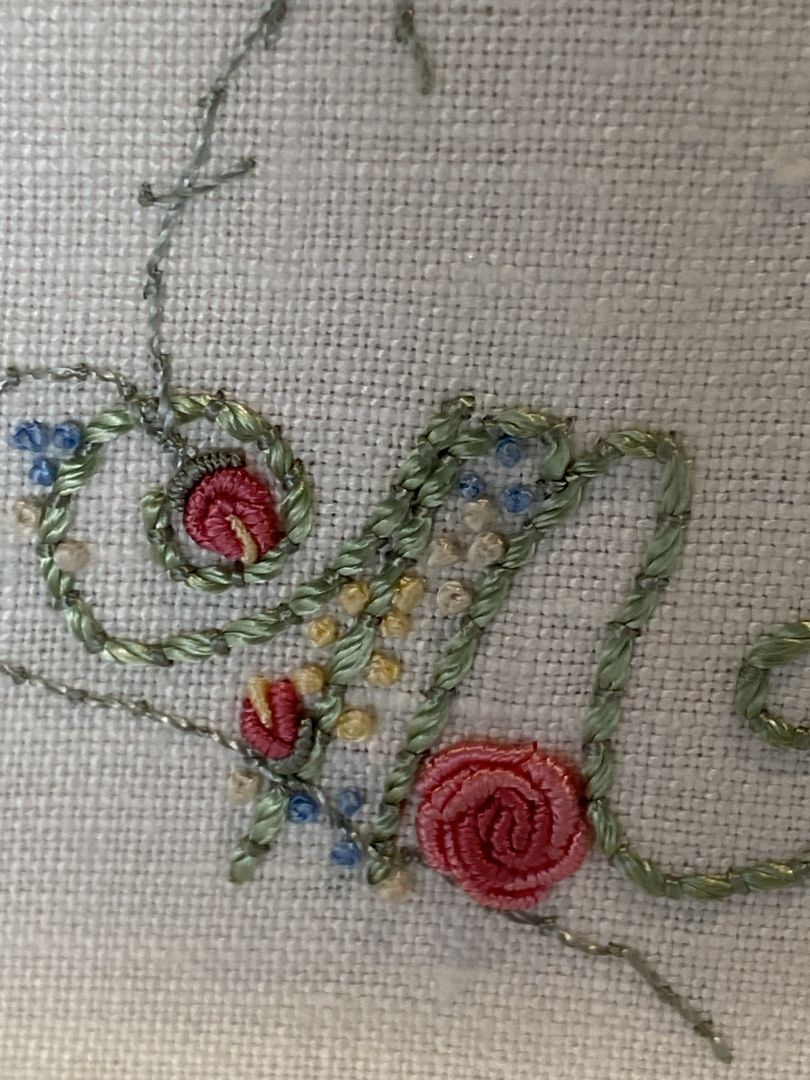 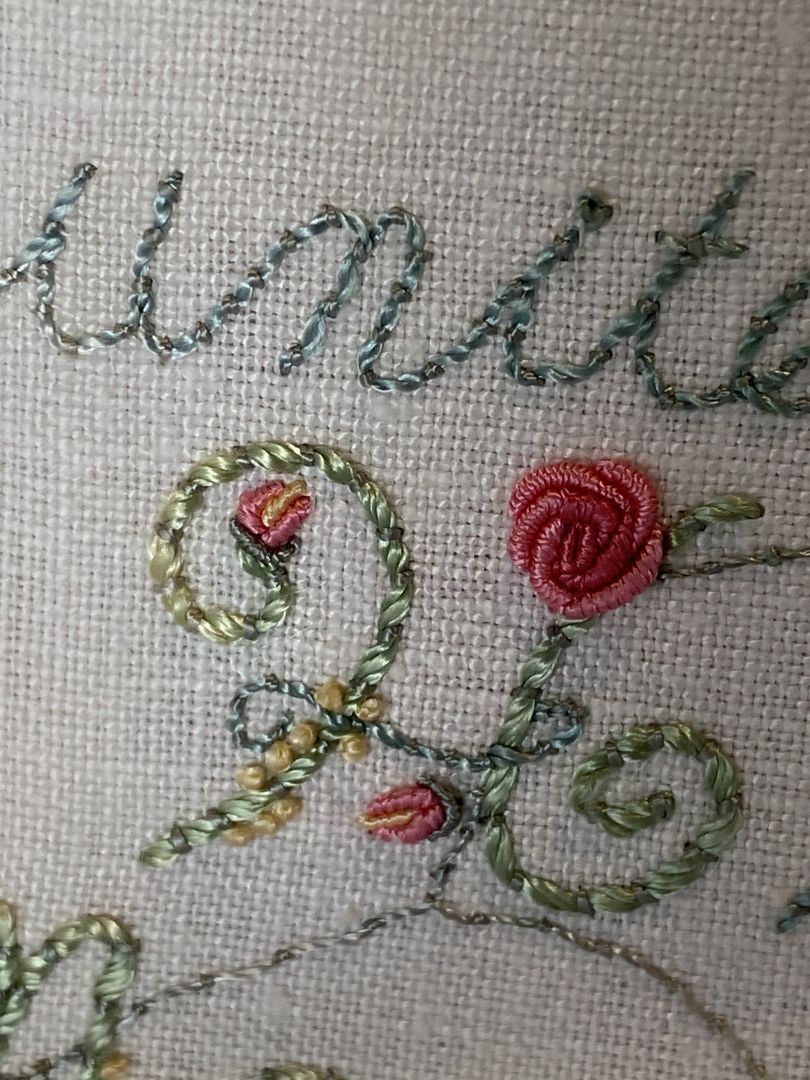 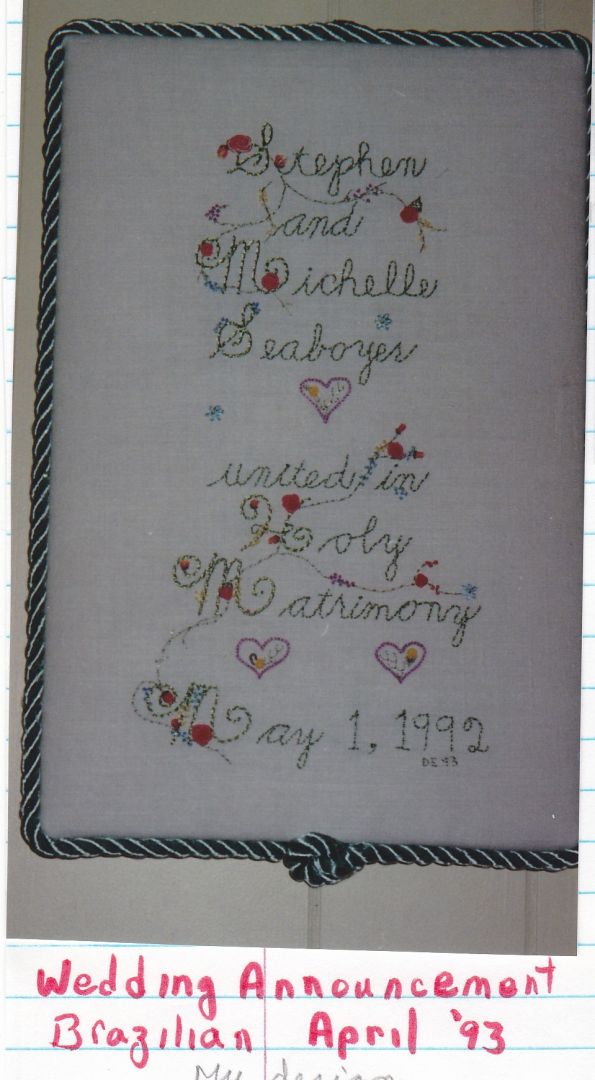 We have 40 chapters across Canada that meet to share their enthusiasm for embroidery. Our chapters and our association are teaching chapters which means we all share and learn from each other and from very talented national and international teachers.

What if a chapter is not close to you or doesn’t meet when you can attend? No problem, you can be a national or international member, or become a member of our online chapter, Virtual Threads.